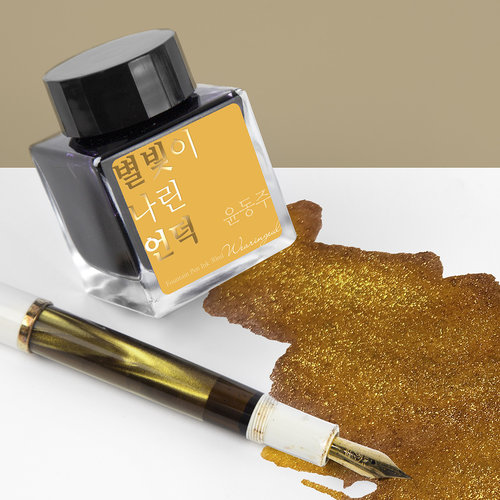 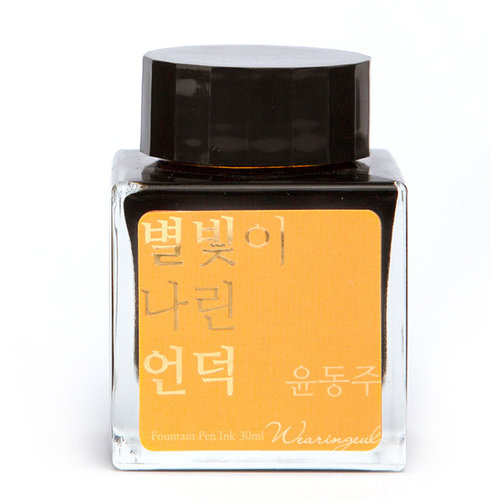 "A Star Spattered Hill" This Wearingeul fountain pen ink illustrates the hill on which golden stars fall. The Yellow/Amber base of the ink is harmoniously mingled with golden glitter. Read more

Ordered before 13:00, vandaag verstuurd.
You still have 00:00:00 hours to complete your order.
Product description
Specifications
Description

The Literature Inks of the Korean brand Wearingeul, or The Color of Literature Project, consists of different series of fountain pen inks in which the colors are inspired by the color moods of literary works.

The No.1 Yun Dong Ju series expresses the mood of Yun Dong Ju's poem Counting the stars at night.

This color, A Star Spattered Hill, illustrates the hill on which gold stars fall. The yellow/amber base of the ink is harmoniously mixed with golden glitter. The focus of this glistening (shimmering) ink is on the word "star".

The color motif and feel of words in poems is illustrated in the inks. The series No.1 Yun Dong Ju consists of 4 ink colors: 'The Sky, Seasons Passing By'; 'A star Spattered Hill'; 'Stars in Autumn'; and 'Shoot the Moon'.

Close
Specifications
Close
0 stars based on 0 reviews
0 Reviews
All reviews
Add your reviewAdd your review
Reviews
Close
No reviews found...
Compare products
0
Start comparison
Please accept cookies to help us improve this website Is this OK? YesNoMore on cookies »